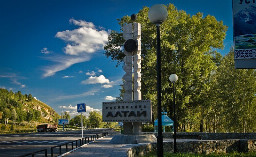 Stella at the entrance to Altai Republic on Chuyskiy Trakt

Altai Republic is located at the south of West Siberia in the basin of Karun and Biya Rivers in Altai Mountains. It was founded on July 1st, 1922 as Oiratskaya autonomous region and transformed to a republic on October 25th, 1990. Administrative center is Gorno-Altaysk City.